An earthquake with a magnitude of at least 4.5 struck off the northwest coast of the Big Island on Thursday in the same area where two stronger temblors struck last month. 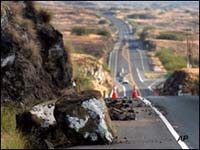 The quake, centered about 11 miles (17.7 kilometers) northwest of Puuanahulu, shook homes on the Big Island, Maui and Oahu, but it did not produce a tsunami threat, according to the Pacific Tsunami Warning Center.

The U.S. Geological Survey estimated its magnitude at 5.0; the Tsunami Warning Center estimated it at 4.5.

Boulders and other debris forced the temporary closure of Highway 19 near Laupahoehoe on the Big Island, said state Department of Transportation spokesman Scott Ishikawa, reports AP.

There were isolated power outages in Kona on the Big Island, but no other damages were immediately reported.