A man freed from prison after DNA exonerated him in a rape case has been charged with trying to hire someone to make a witness in another case "disappear," according to police records. 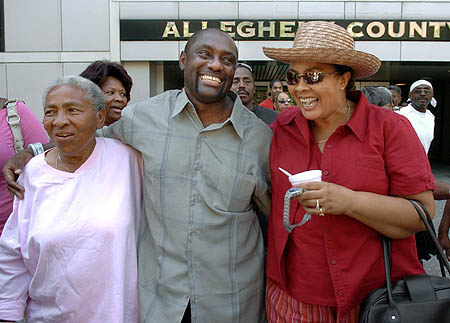 Thomas Doswell, 47, of Pittsburgh, who had been incarcerated for nearly two decades before leaving prison last year, was arraigned Wednesday on charges of criminal solicitation and criminal conspiracy.

In July, he was accused of slapping and choking Adrienne Young and was ordered to stand trial for simple assault. His lawyer has denied the allegation.

Authorities say Doswell offered a man $1,000 to make Young "disappear" before a scheduled court hearing Tuesday, according to a criminal complaint.

In a phone call about two weeks ago, Doswell asked the man, Paul Milton, "if he was going to handle the matter," the complaint stated.

Milton instead contacted Young, according to the report.

Defense lawyer James DePasquale said authorities do not have enough evidence to uphold the latest charges.

"When we're in a trial the truth will come out. But this is all nonsense," he told The Associated Press. "They have to prove these charges, and I don't think they can."

Doswell also was charged in September with luring a child into a vehicle and other charges after allegedly offering a ride to a 17-year-old girl, but then refusing to let her out of his car.