Bride: wedding cousin at age 14 left me "trapped and defeated"

A woman who says she was forced to marry her cousin when she was 14 told a judge that she sometimes used sex to get favors from her husband, such as money and the freedom to see friends. 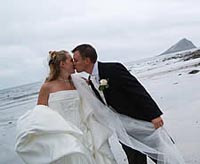 Bride: wedding cousin at age 14 left me "trapped and defeated"

"I would just try to be a willing, submissive wife so that he would feel good about letting me do these things and have these things," the woman, now 20, testified under cross-examination Tuesday.

She is the key witness in the case against Warren Jeffs, leader of the Fundamentalist Church of Jesus Christ of Latter Day Saints.

Jeffs, 50, is charged with two counts of rape as an accomplice for his suspected role in arranging the marriage between her and her 19-year-old first cousin. The woman was testifying at a hearing for the judge to decide whether there is probable cause to send Jeffs to trial.

In court documents, prosecutors say the bride, identified as Jane Doe No. 4, objected to the marriage and later begged to be released. The Associated Press does not identify victims of sexual assault.

The ceremony at a Nevada motel in 2001 was "one of the most painful things I've ever been through. I just want to move on with my life and forget it happened," the woman testified.

She said she refused to say "I do," take her groom's hand or kiss him. Finally, she relented, submitting to a "peck" and then locking herself in the bathroom.

"I felt completely trapped and defeated," she said.

Jeffs' defense team, which has said he is being persecuted for his religious beliefs, plans to call two witnesses, including the woman's current husband.

Looking gaunt and pale in a dark gray suit, Jeffs smiled slightly throughout most of the hearing, which included testimony from two of the woman's sisters.

Jeffs' attorneys introduced photos of his accuser and her ex-husband in which they appear to be a smiling, laughing couple, and they got her to acknowledge Jeffs never explicitly ordered her to have sex with her new husband.

The woman said she never told family or friends that she believed she was being raped. She fled the marriage in November 2004 and married her current husband.

"There is, there was, no rape in this case," defense attorney, Wally Bugden, said outside court. "Officiating at a wedding ceremony does not make Mr. Jeffs an accomplice to rape."

Bugden said the case reflects intolerance of people who engage in cultural and religious practices that differ from the mainstream.

Defense attorney Tara L. Isaacson also introduced in court sweetheart notes the couple had traded and quoted from the accuser's journal in which she expressed enthusiasm about being singled out for marriage. The woman testified that the journal entry was written before she learned the identity of her partner.

"Was every day with (the husband) miserable?" Isaacson asked.

"Many of them were," the woman said.

The FLDS church, which is based in two small communities on the Utah-Arizona border and has an estimated 10,000 members, practices polygamy and represents itself as an offshoot of the mainstream Mormon church, based in Salt Lake City. Congregants revere Jeffs as a prophet and are taught to be obedient, including marrying at his behest.

The Mormons disavow any connection and renounced polygamy in 1890 as a condition of statehood for Utah, reports AP.

Raised in the FLDS faith since birth, Jeffs' accuser said she felt a heavy responsibility to "the entire community" in the days leading to the marriage ceremony.

"I was scared. I didn't have any place to go," said the woman, who has left the church and is married to a different man. "I felt that if I didn't do what I was told, I would forever pay the consequences."

Security at the courthouse was tight Tuesday, with police sharpshooters posted on the red rock hills that ring the building. No vehicles were allowed to park on the street.