The Israeli army launched a broad offensive into Gaza City early Tuesday, targeting and killing a top Hamas commander and an elderly woman in Gaza's largest neighborhood, the Islamic group and the military said. 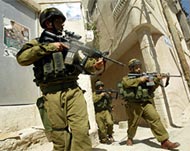 Taking up sniper positions on rooftops in Gaza's Zeitoun neighborhood, troops spread out in the area, storming the home of Wael Hassanin, a local leader in the ruling Hamas group, witnesses said.

Gunmen flocked to the area as troops called on loudspeakers for Hassanin and his brother, Ibrahim, to surrender, said the militants' mother, who identified herself only as Umm Mahmoud. A fierce gunbattle erupted between the gunmen and the forces, who were backed by dozens of tanks and armored vehicles.

Wael Hassanin, 26, was killed in the fighting, Hamas said in a statement. Hassanin's brother, Ibrahim, was arrested, his mother said. A 70-year-old woman was also killed in the battle, Palestinian medical officials said.

The military operation, which began at about 2 a.m., is the latest Israeli attempt to halt Palestinian rocket fire from Gaza into Israel. In the hours before the offensive, Gaza militants fired at least 25 homemade rockets into Israel, the groups said in statements. Last week, a woman was killed in a rocket strike.

After dawn Tuesday, the troops spread out into a second area of Gaza City, taking up positions east of the Jabaliya neighborhood, an area often used by militants to fire rockets. The army would confirm there was an ongoing operation in the city, but declined to provide further details.

Bulldozers plowed over farms, ripping up irrigation systems and destroying greenhouses and fields. A main electricity transformer, which provides about 60 percent of the power to the Zeitoun neighborhood, was destroyed in the fighting.

The Israeli army has increased its military pressure on Gaza in recent weeks, launching a broad, but largely ineffective, operation in the northern town of Beit Hanoun earlier this month. The air force has been targeting militants and areas in which arms are believed to be stored.

After nightfall Monday, two Hamas militants were killed in an Israeli airstrike on a car in Gaza City, Hamas officials said. The Israeli military said it targeted a car carrying "terrorist activists."

After the airstrike, Palestinians streamed to a house in Gaza City, saying the owner, a Hamas activist, had received a warning from Israel that the house was to be targeted. Such demonstrations foiled three previous Israeli attacks on houses in recent days, reports AP.

The violence in Gaza has been accompanied in recent months by increasing poverty brought on by international sanctions slapped on the Hamas-led government that took power in March.

Palestinian President Mahmoud Abbas, head of the moderate Fatah Party who was elected separately, had hoped to convince Western countries to lift the boycott by establishing a government of experts to replace the Hamas-led body. But on Monday Fatah officials suddenly announced that months of negotiations had broken down without agreement on the key issues.