A man was charged in an apparently random shooting spree that killed two people and wounded three others. 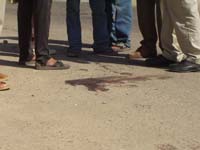 Contrelle Ardell Harbin, 26, was charged Sunday with two counts of first-degree premeditated murder, three counts of assault with intent to commit murder, being a felon in possession of a firearm and using a firearm to commit a felony. He also was charged as a three-time habitual offender.

The shootings took place within 10 minutes early Thursday in a three- to four-block area on Detroit's west side. Authorities have not determined a motive; the victims weren't robbed.

Prosecutors say Harbin fatally shot Ophelia Fry, 58, through the driver's-side window of her car in front of a day-care facility where she worked. He then approached a man in a vehicle and shot him in the elbow before killing Arthur James Smith, 50, authorities said. Two other men were also wounded.

A woman told investigators that Harbin confessed to her, and led police to him Thursday at a house about a half-mile from the shootings. A victim identified Harbin in a lineup, police said, reports AP.

The prosecutor and jail did not know whether Harbin had an attorney.

The murder charges carry a mandatory sentence of life in prison without parole. Assault with intent can bring a life sentence.

Police were still investigating whether there was a second gunman, as one victim had described, Deputy Police Chief James Tate said.

Harbin was charged as a habitual offender because he was convicted in 2000 of carrying a concealed weapon and fleeing and eluding police, said Maria Miller, a spokeswoman for the Wayne County prosecutor's office.