Man indicted with Wesley Snipes to appear in federal court

One of two men indicted with actor Wesley Snipes on eight counts of tax fraud was scheduled to appear in a Florida federal court Wednesday, according to a media report. 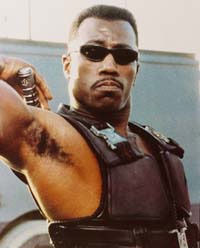 Man indicted with Wesley Snipes to appear in federal court

Eddie Ray Kahn was detained in Panama on Tuesday and flown back to Florida. A bond hearing for him was set for Monday, and Kahn will remain in federal custody in Ocala until then, said Steve Cole, a spokesman for the U.S. Attorney's Office.

Kahn is accused of promoting tax-evasion schemes through his now-defunct entities, Guiding Light of God Ministries and American Rights Litigators.

According to the Oct. 17 indictment, Snipes used Kahn's tax packages to unsuccessfully claim nearly $12 million (Ђ9.4 million) in refunds for taxes he paid in 1996 and 1997. Snipes had his taxes prepared by accountants with a history of filing false returns to reap payments for their clients, reports said. As part of the deal, the indictment alleges, the firm, American Rights Litigators, would receive 20 percent of refunds from clients.

Snipes, who had a home in Windermere near Orlando, remains a fugitive. He is apparently in Namibia working on a film. Federal officials said they are negotiating with Snipes' attorneys to have him surrender.

"We don't have a timetable," Steve Cole, a spokesman for the U.S. Attorney's Office, told the Sentinel, reports AP.

Douglas Rosile, a Venice, Florida, an accountant who worked on Snipes' taxes, was released by a federal judge in Ocala after he surrendered to authorities Oct. 17.