Torrential rainfall in Turkey caused severe flooding across the country and was blamed for the deaths of at least 8 people in the southeast, local authorities said Wednesday. At least 15 people were reported missing in the same region. 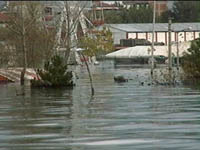