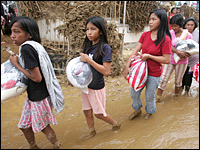 Cimaron, the second major typhoon to hit the north in as many months, packed maximum winds of 175 kilometers (109 miles) per hour and gusts of up to 210 kph (130 mph) when it came ashore.

It was forecast to exit the region in the direction of Vietnam later Monday. Winds had dropped to 120 kph (75 mph), with gusts up to 150 kph (94 mph), by midday, although forecasters said it was likely to intensify again over open water.

Five people were reported drowned or killed by falling trees and 15 injured in the coastal town of Dinapigue in Isabela province. Mayor Renato Candido said 90 percent of the houses were damaged in the town of 5,000 residents.

Police in Isabela, about 330 kilometers (210 miles) northeast of Manila, also reported a 29-year-old farmer drowned when his boat overturned amid strong currents.

Landslides killed a 4-year-old girl in Bugias, a mountain town in Benguet province, and a 53-year-old man in nearby Kalinga province.

Radio DZBB said a mother and child were killed in neighboring Aurora province, where the power has been off since Sunday night. No details were available.

In Baguio city, 210 kilometers (130 miles) north of Manila, where the eye of the typhoon passed Monday, a landslide buried a house, injuring a mother and her two daughters, said fire official Senior Superintendent Carlito Romero.

Two towns were cut off by floods Jones in Isabela and Tuao in nearby Cagayan province.

Nearly 30 northern and northeastern provinces were placed under a storm alert. President Gloria Macapagal Arroyo, on a visit to China, called for prayers Sunday as she ordered schools and government work suspended. Domestic flights to the north were canceled.

Although the typhoon did not appear to be drenching the mudslide-prone area as badly as feared, rising rivers made at least five bridges impassable. Officials said water was released from at least one major dam to prevent overflowing.

The typhoon threatened commemorations for All Saints' Day on Wednesday, a public holiday when millions travel to cemeteries to remember their dead, some leaving days in advance for outlying provinces. Officials warned people to cancel trips to threatened areas, reports AP.

Cimaron is a Philippine word for wild ox.

Last month, Typhoon Xangsane left 230 people dead and missing as it ripped through Manila and neighboring provinces. About 20 typhoon and tropical storms lash the country each year.