Liverpool fan to be moved from Bulgaria to British jail

A Liverpool fan convicted of attempted murder in Bulgaria and sentenced to 10 years in prison will be moved to a British prison to serve out the rest of his sentence, a court official said. 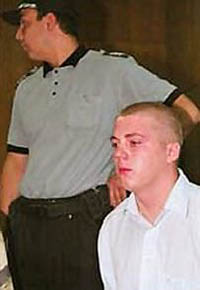 Liverpool fan to be moved from Bulgaria to British jail

Michael Shields, 20, of Liverpool, England, was convicted of attempted murder in July 2005 after a court found him guilty of hitting Martin Georgiev, a Bulgarian bartender with a paving stone, leaving him with brain damage.

Shields had been visiting Varna after watching Liverpool win the Champions League final in neighboring Turkey. Another Briton implicated in the assault, 19-year-old Anthony Wilson, was given a suspended sentence of 2Ѕ years in jail for drug possession.

"The procedure of Michael Shields' transfer was completed," Varna district court spokeswoman Elena Bangieva said by telephone. "His family has paid the 200,000-leva (Ђ102,000; US$129,000) fine plus the accumulated interest."

Bangieva could not reveal the exact date of the transfer, saying only that it would happen "at the beginning of next month."

In April, the court reduced Shield's sentence to 10 years from 15, reports AP.

Another Briton, Graham Sankey, later reportedly confessed to the assault to a Liverpool solicitor but refused to come to Bulgaria to testify. Bulgarian prosecutors, however, rejected a request by Shields' lawyers to investigate Sankey's confession, saying it had been insufficient for an investigation and contradicted other evidence in the case.