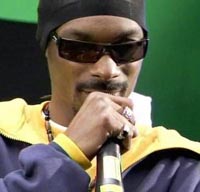 Airport police officers stopped Snoop Dogg at a loading zone for a vehicle code violation. When officers searched the vehicle they found a gun and marijuana, police said.

"There was no basis for this arrest," the rapper's attorney, Donald Etra, said in a statement. "We believe that once this is cleared up, all charges will be dismissed."

The Orange County district attorney's office has been considering charges against Snoop Dogg after authorities last month discovered a 21-inch (53-centimeter) collapsible baton in his bags as he boarded a New York-bound flight from John Wayne International Airport.

The rapper was convicted in 1990 of cocaine possession and charged with gun possession after a 1993 traffic stop. He pleaded guilty in exchange for three years' probation and a promise to make public service announcements against violence, reports AP.

He was acquitted of murder in 1996 following the death of an alleged gang member who was killed by gunfire from the vehicle Snoop Dogg was traveling in.