A wind-whipped wildfire started by an arsonist killed four firefighters and stranded up to 400 people in an recreational-vehicle park when flames burned to the edge of the only road out, officials said. 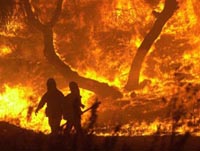 "Everybody is hunkered down here. They're fighting the fire around us. It's across the street from us," said Charles Van Brunt, a ranger at the station at the entrance to Silent Valley Club, the recreational vehicle park near Palm Springs. The residents were in no immediate danger, he said Thursday.

Authorities asked people in the RV park to stay put to leave roads clear for firefighters. Hundreds of others in the area were forced from their homes.

It was the deadliest wildfire firefighting disaster in the United States since July 10, 2001, when four firefighters were killed in Washington's Okanogan National Forest. They died after becoming trapped by flames on a dusty dead-end road in a remote canyon.

The Forest Service crew was trying to protect a house as dry desert winds of 25 mph (40 kph) or more blew a wall of flames down on them in the hills northwest of Palm Springs.

"They had left their truck to do structure protection when the fire overran them," said Forest Service spokesman Pat Boss, adding that the flames came down so quickly they had no time to retreat to their engine or use protective sheltering.

Three firefighters died at the scene, and two were hospitalized in critical condition. One of those two died several hours later. The other had burns over 95 percent of his body, Boss said.

Thursday's deaths brought to 19 the number of California firefighters killed in the line of duty over the past year, according to statistics kept by California Professional Firefighters, a lobbying organization.

Another official believed the blaze was set just as the winds picked up in order to maximize destruction. Riverside County Sheriff Bob Doyle dispatched homicide detectives to the scene to work with FBI agents during the investigation.

In less than 24 hours, the fire blackened almost 38 square miles (97 square kilometers), and more than 1,100 firefighters were brought in along with water-dropping helicopters and planes. Ten structures were destroyed, and at least five were homes.