A sanitation worker was convicted of shooting a woman reportedly eight months pregnant with his child and dumping her body in the Hudson River. 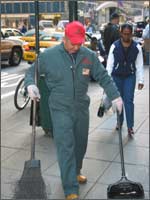 Roscoe Glinton, who is from the Bahamas but was living in the city's Brooklyn area, was convicted Wednesday of second-degree murder in the death of Lisa Eatmon, 33, who was pulled from the water off Manhattan on April 3, 2005. An autopsy showed she died of a gunshot wound to the head.

The jury deliberated for an hour and a half, a spokeswoman for the Manhattan district attorney's office said.

Assistant District Attorney Joan Illuzzi-Orbon told the court during the trial that Eatmon, who also lived in Brooklyn, was about to deliver a healthy baby when she was killed.

Glinton's lawyer, Steven B. Kirschner, said at the time that he knew of no proof, as published reports alleged, that the baby Eatmon was carrying was fathered by his client.

"Even if it is Roscoe's baby, that doesn't make him a murderer," the lawyer said then.

Glinton had three children from a previous marriage to Deborah Glinton, who lived in Newburgh, New York, and was reported missing in June 1998 after she failed to show up for work at a doctor's office.

A hunter found her skeletal remains in 2001 at the bottom of an embankment in a remote area, reports AP.

Her death was ruled a homicide, mostly because of where the remains were found, Kirschner said, but no cause of death was determined. He said Roscoe Glinton was investigated in that case but police did not file charges against anyone.

He had been a sanitation worker for 13 years.