South Korea's coast guard will search North Korean waters on Thursday for six missing sailors of a Russian cargo ship believed to have sunk off the country's east coast this week. 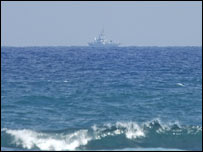 North Korea agreed to the nine-hour search of areas of its waters near the maritime border, the coast guard said in a statement. The search is set to begin at 9 a.m. (0000 GMT).

A patrol ship, a patrol airplane and a helicopter will be mobilized for the operation, the statement said.

"There is a possibility that the missing could have drifted into the North Korean waters," the coast guard said.

The search comes as tensions are running high over North Korea's first-ever nuclear test on Oct. 9, and as inter-Korean relations remain chilled after the North's missile tests in July.

The 2,448-ton Sinegurye, with a crew of 18, sent a distress call around noon Monday after encountering high waves and strong winds 73 nautical miles (135 kilometers) off South Korea's Ulleung Island, according to the coast guard.

Eleven members of the crew have been rescued, and another was found dead.

The identities of the crew members were not available, reports AP.

The Sinegurye had been transporting timber from a port in Russia's Far East to a Chinese port, the official said.