A man was killed when a large kangaroo crashed through the windscreen of the car he was driving in Outback Australia, police said Tuesday. 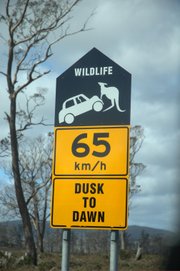 The kangaroo, which appeared from photographs to be more than 1.2 meters (4 feet) tall, was struck by a four-wheel-drive vehicle on a road near Manjimup town in Western Australia state and flung into the path of the victim's oncoming sedan, police said in a statement.

"The animal went through the windscreen of the sedan and into the back seat causing the driver to lose control and crash the vehicle," the statement said.

Police spokeswoman Ros Weatherall said the kangaroo hit the driver, a 50-year-old man whose name wasn't released, as it went through the car and caused him serious head injuries, reports AP.

"It was very unfortunate," Weatherall said.

The accident occurred shortly before dusk on Sunday about 300 kilometers (186 miles) south of the state capital Perth, near the wine producing region of Margaret River. The man was airlifted to a Perth hospital but died on Monday, police said.