The conflict between Russia and Georgia (a former republic of the Soviet Union in the Caucasus) is gathering pace. The Moscow police have asked schools to make lists of schoolchildren with Georgian names. The police are trying to track down illegal immigrants living in Russia’s capital through their children who attend public schools in Moscow. 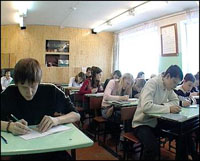 A bitter dispute erupted last week between both countries after the arrest of four Russian officers on charges of spying. Despite their release, Moscow has slapped a range of punitive sanctions on its small southern neighbor as well as launching a crackdown on Georgian migrants and businesses in Russia.

Some schools had received the request, Moscow city hall education department spokesman Alexander Gavrilov told The Associated Press. He criticized the police action, saying that all children had an equal right to education.

"If the law enforcement bodies carry out work searching for illegal migrants, it's their business and there is no way schools must be involved in this process," the official said.

A local police station telephoned a school in northern Moscow on Thursday, demanding a list of pupils with Georgian surnames, said Nina Zubareva, an official at the school.

"There are very few pupils with Georgian surnames in our school and we have honored the police request. I must say that our pupils are Russian citizens and have Moscow registration. Their families have been living in Moscow for years," she said.

Moscow police denied it had told schools to provide lists of Georgian students.

"We did not issue any such instructions, nor do we plan to," police spokesman Valery Gribakin told Ekho Mosvky radio.

Russia suspended transport and postal links with its southern neighbor on Tuesday. On Thursday, Moscow said it would abolish quotas allowing a certain number of Georgians each year to obtain residency and work permits. Several Georgian-run casinos and restaurants in Moscow have been raided and closed down for alleged regulatory violations.

According to some estimates, around 1 million Georgians - more than a fifth of Georgia's population - work in Russia, and their families rely on the hundreds of millions of dollars (euros) in annual remittances sent home. Russian authorities say that more than half of Georgians in Russia are working illegally, the AP says.

Deputy Foreign Minister Alexander Yakovenko on Thursday said that Tbilisi had to end its "anti-Russian" behavior if it wanted the dispute to calm down, saying Moscow wanted to be respected.

Bilateral relations have grown progressively worse since pro-Western President Mikhail Saakashvili came to power in Georgia after the 2003 Rose Revolution and vowed to move his country out of Russia's sphere of influence and join NATO and the EU.