A former teacher who admitted killing a teenager and eating part of his body 27 years ago will be required to stay in a secure mental hospital for at least two more years, the state Supreme Court decided Monday. 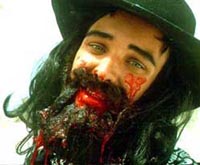 He was found innocent by reason of insanity in the 1979 murder and mutilation of Paul Masters, 18.

The middle school teacher confessed to killing Masters after the youth wandered into his yard. Fentress lured him into the basement, tied him to a post, sexually abused and mutilated him, and shot him twice in the head before cooking and eating parts of his body, reports AP.

Fentress had lived in a nonsecure psychiatric hospital in until 2002, when he admitted sexually abusing two young boys years before.

Under state law, Fentress is eligible for release every two years unless a judge decides he is still dangerously mentally ill.