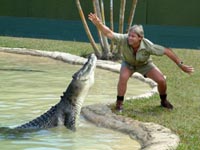 Australia Zoo, the wildlife park Irwin ran in northeastern Queensland state, issued a statement confirming he was killed Monday "by a stingray barb to his heart" while filming a sequence for his daughter's new television series on the Great Barrier Reef.

Irwin was stung about 11 a.m. (0100GMT) on Batt Reef, off the remote resort town of Port Douglas.

Crew members aboard Irwin's boat, Croc One, called emergency services in the nearest city, Cairns , and administered cardio pulmonary resuscitation techniques as they rushed the boat to nearby Low Isle to meet a rescue helicopter.

"The world has lost a great wildlife icon, a passionate conservationist and one of the proudest dads on the planet," John Stainton, Irwin's friend and producer said in the statement.

"He died doing what he loves best and left this world in a happy and peaceful state of mind. Crocs Rule!"