Two explosions hit Shiite targets in northern Baghdad after sundown Tuesday, killing at least 17 people and wounding 72, police said. The attacks raised the day's death toll in the capital to at least 58 and renewed concerns the country was sliding toward sectarian civil war. 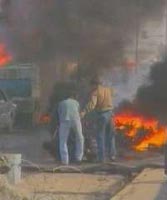 At about 9 p.m. the sound of what appeared to be artillery or tank fire could be heard booming from southwest Baghdad's notorious Dora district.

Police officials said a car bomb hit the Abdel Hadi Chalabi mosque in the Hurriyah neighborhood, killing 14 and wounding 62. Mortar fire at the Imam Kadhim shrine in the Kazimiyah neighborhood on the opposite side of the Tigris River killed one and wounded 10.

A bomb had exploded outside the Sunni Thou Nitaqain mosque in the Hurriyah neighborhood at 8 a.m. Tuesday, killing three and wounding 11.

Police said still were digging through the wreckage of the mosque and nearby shops looking for victims.

The Tuesday night attacks were clearly a continuation of sectarian violence that erupted in the country after a Shiite shrine was bombed in the predominantly Sunni city of Samarra on Wednesday.

The resumption of sectarian attacks appeared to make it unlikely that Sunni politicians would soon be welcomed back to talks on forming a government with majority Shiites and Kurds. U.S. plans to begin drawing down troops in Iraq by summer hinge on creation of a stable government and diminished violence.

As of 4 p.m. Tuesday, the government said 379 people were killed in violence directly tied to reprisal attacks for the bombing which destroyed the golden dome atop the Askariya shrine.

Before sunset Tuesday, five bomb attacks rattled the capital and took at 41 lives and wounded scores.

Authorities had imposed a two-day round-the-clock curfew on Baghdad and in three neighboring provinces over the weekend. That combined with a vehicle ban in the capital Sunday and until dawn Monday had briefly calmed the sectarian violence.

The attacks on obviously religious targets, however, resumed with a vengeance late Tuesday.