At least three people died and 38 others were injured Saturday as a surge by thousands of fans toppled security barriers at an event featuring RBD, a Mexican band starring in a popular soap opera. 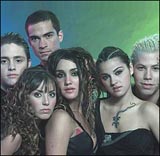 The incident comes weeks after police including a SWAT team in the U.S. states of New Jersey and Texas struggled to contain unexpectedly large turnouts of fans for the group, which stars in the television show "Rebelde."

Between 10,000 and 15,000 fans gathered outside a shopping center in Sao Paulo for an autograph session by the group, said Adriano Moneta, a spokesman with Sao Paulo state's public safety secretariat.

Moneta said a 47-year-old woman and two girls aged 15 and 16 died in the Saturday morning incident. Their identities were not immediately released.

Event organizers could not be immediately reached for comment, but authorities said it wasn't likely any members of the band were wounded. Spokesmen for the Televisa network in Mexico City that produces the program were not in their office on Saturday.

Police in Dallas, Texas, called out a SWAT team to control some 10,000 fans, some of whom waited for six hours to see the group at a Wal-Mart on Jan. 13. The size of the crowd forced organizers to cancel it, reports AP.