Birds crash into Airbus A-321 during takeoff in Moscow

A passenger of the Airbus A-321 aircraft, which performed hard landing at the airport of Zhukovsky near Moscow captured the moment, when birds, most likely gulls, crashed into the engines of the plane during takeoff. 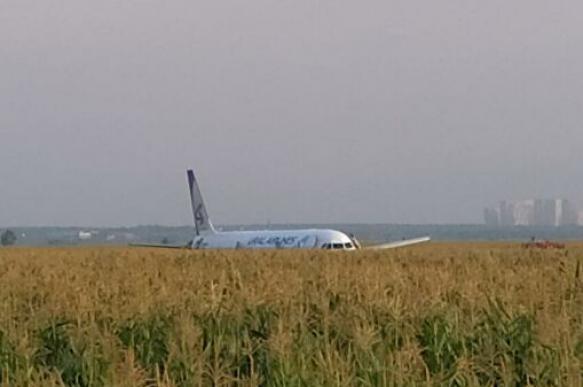 The video shows that the incident occurred at the moment when the plane is taking off from the runway. Other passengers also said that something went wrong immediately after takeoff.

Airbus A-321 performed an emergency landing near the Zhukovsky airport after one of the engines of the aircraft caught fire. The airliner was bound for Simferopol. There were 226 passengers and seven crew members on board. Many suffered bruises and minor injuries. The crew evacuated all the passengers. It was possible to avoid the fire on board; no one was killed.

The plane landed 15 minutes after takeoff at a distance of about one kilometer from the airport runway. The aircraft did not extend the landing gear as the liner landed on its belly in the cornfield.

It was reported that 23 of the passengers, including five children, were hospitalized with minor injuries.

First pilot Damir Yusupov managed to land the aircraft safely on the cornfield. He also supervised the evacuation of the passengers. Yusupov's flight experience counts over 3,000 hours. Damir Yusupov, 41, graduated from the St. Petersburg State University of Civil Aviation and was hired by Ural Airlines soon afterwards. Second pilot Georgy Murzin is 23 years of age, he has 600 flight hours of experience.

Dmitry Peskov, the official representative of the Kremlin administration, told reporters on Aug 15 that the pilots of the A321 aircraft performed indeed a heroic act. The passengers and the crew remained alive, so one should thank pilots for that in the first place, Peskov said.

In June, a TUI plane made an emergency landing in Scotland after a bird crashed into the plane. The plane was damaged as a result of the collision and had to land in Glasgow. No one was hurt.