Four children were killed as a result of the fire that sparked in a tent camp in the Khabarovsk region of Russia. There were 26 tents in the camp, the blaze destroyed 20 of them. At the time of the fire, there were 189 children staying in the camp. Originally, it was reported that one child was killed, and three were hospitalised in serious condition. Later it was reported that the three children fell into a coma and subsequently died. 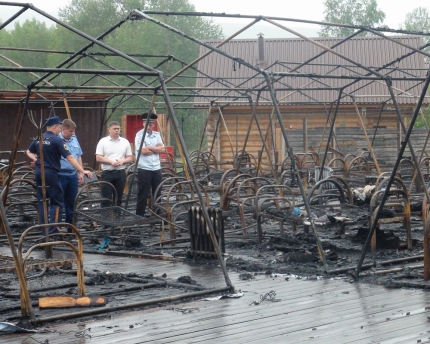 It was established that the camp had been checked for fire safety before opening. The fire could start because of a faulty heater, on which clothes were being dried.

Maxim Kuznetsov, the director of the children's tent camp "Holdomi" was arrested. The Investigative Committee has already initiated two criminal cases - under Article 109 of the Criminal Code of the Russian Federation ("Causing death by negligence") and under Article 238 ("Providing services that do not meet safety requirements").

According to the Ministry of Health of the Russian Federation, 12 people, of whom seven are children, were injured in the fire. Outpatient medical care was provided to five injured adults; six children were hospitalized. Two children who suffered from inhaling combustion products remain in a satisfactory condition. Three others were rushed to hospital in critical condition with thermal burns and thermal inhalation injuries. Doctors fought for the lives of two girls and one boy in intensive care, but could not save them.

The authorities of the Khabarovsk region announced three days of mourning over the death of the children. Families of the victims will receive one million rubles each.

Prime Minister Dmitry Medvedev instructed to check all children's summer camps in Russia, similar to the one that got burned in the Khabarovsk region. Using electric heating appliances in tent camps goes against safety rules, he noted.