The Islamic State* terrorist group (banned in Russia) claimed responsibility for the explosion of the apartment building in Russia's Magnitogorsk. 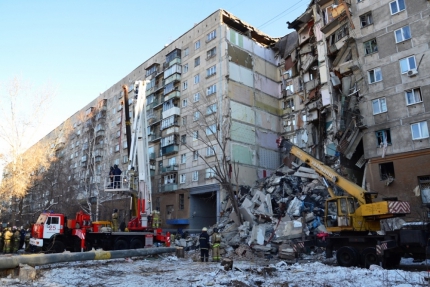 An article, which appeared in the weekly Arab newspaper Al Naba, said that the militants had allegedly planted explosives in the block of flats on Karl Marx Street, 164 "between the third and the tenth floor" and blew up the bomb in the morning of December 31. The group explained its long silence on the topic with security considerations for those who committed the terrorist attack. The jihadists did not specify any other details in the article.

In response to the publications, representatives of the Russian Investigative Committee reiterated that there were no traces of explosives found on the site of the tragedy.

"We have been investigating into all possible versions from the very beginning, but the domestic gas explosion remains the priority version to date. I emphasise that neither explosives nor their components have been found on the fragments taken from the scene by experts and forensic experts," Svetlana Petrekno, an official representative of the Investigative Committee said.

"In addition to all this, we collect other evidence, we question witnesses, eyewitnesses and those who suffered in the explosion. Conclusions about the reason for what happened can only be made on the basis of a complex of investigative actions and a thorough analysis of the evidence obtained. Therefore, I suggest journalists do not trust reports from terrorist organisations. They may often attribute themselves to high-profile incidents in different countries of the world," she added in a statement.

A section of the apartment building in Magnitogorsk collapsed early in the morning of December 31. Thirty-nine people were killed under the rubble of the house. According to the official version, it was an explosion of household gas that caused the tragedy, but local media reported already in the evening of January 2 that this could be a terrorist act. On January 1, a Gazelle minibus exploded in Magnitogorsk on January 1.

After three weeks of investigation, the Investigative Committee has not named the main version of the tragedy.