The young man, who arranged the mass shooting and the explosion in the Kerch college, could have an accomplice.  The shooter has been killed and identified. Eighteen people were killed and 50 injured in the tragedy that shocked Russia on October 17. The college director compared the tragedy to what happened in Beslan in 2004. 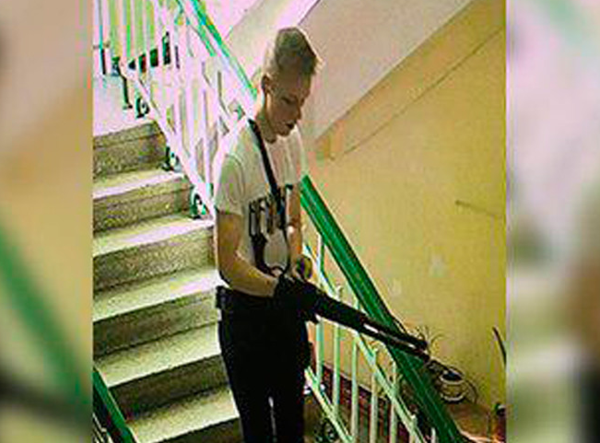 The shooter was identified as Vladislav Roslyakov; he was 18 years old, official representative of the Russian Investigative Committee, Svetlana Petrenko said. The young man was found dead on the second floor of the college. It is believed that he committed suicide. The attacker was captured on CCTV cameras inside the building. Roslyakov entered the Polytechnic College in 2015. On September 8, he received permission for a 12-caliber rifle. Several day ago, the young man purchased 150 cartridges for it.

Experts believe that the tragedy that the man had organised was not a spontaneous massacre, but a very well thought-out terrorist attack. Roslyakov may have had an accomplice who could detonate the bomb remotely, because the scale of the tragedy excludes the participation of only one attacker. It is believed that one of the students, supposedly an accomplice, had left a backpack in the canteen shortly before the explosion.

Most of the victims of the tragedy died of gunshot wounds, forensic experts said.

Vladislav Roslyakov entered the school at about 11:43 a.m., went up to the second floor and started shooting everyone he could see there. At 11:45 he ran out of cartridges and went downstairs, where he exploded his bomb.

Below is the list of past violent incidents at Russian schools.

Moscow, February 3, 2014: a tenth-grader named as Sergei Gordeev, armed with a carbine and rifle, came to School N263, where he shot a geography teacher and took classmates hostage. Then he opened fire on the policemen who arrived at the scene, killing a security officer. On March 3, 2015, the court sent the teenager to compulsory psychiatric treatment.

Bryansk, December 15, 2014. A 15-year-old student wounded a classmate from an air pistol in the changing room of the school gym. According to officials, a conflict sparked between the students, during which the teenager pulled out a pistol and fired several shots in the walls and in the floor. One of the bullets ricocheted into the foot of the girl who was standing nearby.

Nizhnekamsk, February 11, 2017. A 14-year-old student fired a pneumatic pistol into his neighbor's eye during a class at School N1. On February 17, the victim died of the wound at hospital.

Komi Republic, on May 12, 2017. In the town of Usinsk, a student opened fire from an air pistol at other children outside School N2 wounding a girl in the eye.

Ivanteevka, Moscow region, September 5, 2017. A 9th-grader, armed with a kitchen hatchet and a traumatic gun, came to school, where he attacked a teacher and started blow up self-made firecrackers in the classroom. The attacker was promptly detained. The teacher, who suffered a cranial injury, was hospitalised in serious condition. Three students who jumped out of a class window to safety suffered injuries.

Vysokovsk, Moscow region, November 28, 2017. A teenager brought a knife and inflicted a stab wound to his classmate's neck. The two boys had had a quarrel before.

Irkutsk, December 18, 2017. A quarrel broke out between minors in one of the schools of the city. One of the students stabbed the opponent. The wounded 15-year-old teenager died. The 16-year-old attacker had been previously prosecuted.

Komsomolsk-on-Amur, December 22, 2017. A ninth grade student started shooting a gun on the territory of the school. The teenager went to the school porch and fired a pistol that outwardly looked like a pneumatic one. Several bullets ricocheted into three seventh-graders, one of them suffered hematomas.

Perm, January 15, 2018. Two 16-year-olds came to school wielding knives. Upon entering the classroom where children of one of the lower grades were studying, the attackers inflicted multiple stab wounds on the students and the teacher. The attackers also stabbed each other and were hospitalised. The attacked ended with 15 hospitalised individuals, among them fourth-grade students and their teacher.

Ulan-Ude, January 19, 2018. A ninth-grader attacked seventh grade students at School N5 with an ax, and set fire to the class by throwing a Molotov cocktail into the room. Seven people, including a teacher and six children, suffered injuries. The attacker himself was hospitalised as well, after he tired to inflict stab wounds to himself before jumping out of the window.