A new video has been unveiled as part of the investigation of circumstances of the fire that started at "Winter Cherry" shopping mall in the Siberian city of Kemerovo. The video was recorded on March 25 at about 4:00 pm local time - at the time when the fire started. 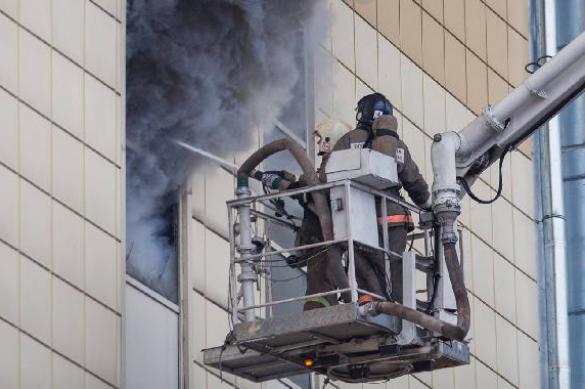 The 1:40-minute video shows the recordings made by three CCTV cameras installed near the children's play area, where the fire sparked. At 15:59, children and adults are seen running out of the playroom. The entire room was in flames already at 16:02.

The video also shows a woman in a dark T-shirt running around the playroom helping the children out.

In the second part of the video, the camera shows the view of the sitting area and a carousel. All of the adults suddenly stand up and look in the same direction, where bright sparks are seen falling from the ceiling on the floor. The lights go out, panic ensues, and people start leaving the area in a hurry.

On March 31, the head of the Investigation Committee, Alexander Bastrykin, presented awards to the people, who provided assistance to visitors to the Kemerovo shopping mall. One of them is Kristina Nikitina, an animator of the children's playroom. After the fire started, the young woman rushed to rescue the children without thinking about her own safety. The awards were also presented to the cadet, who saved three children from the fire, and an employee of the shoe store Farzon Salimov, who showed the people out of the burning building.

The fire started in the cavity between the third and fourth floors, where a power cable was running.  The first smoke detector was activated in the children's play area.