In Kemerovo, the death toll from the fire at "Zimnyaya Vishnya" ("Winter Cherry") shopping center continues to climb and currently counts 64 people. The fire still continues; fire brigades have been working on the site for over 12 hours now. 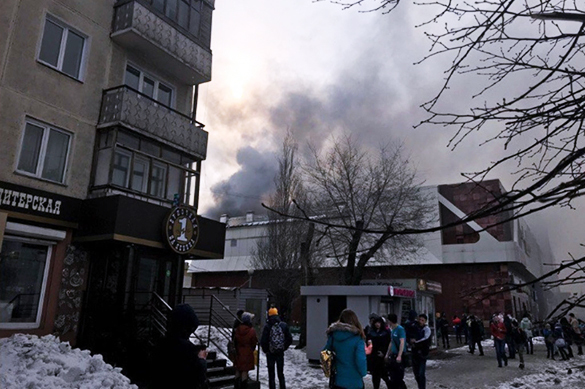 The head of Russia's EMERCOM, Vladimir Puchkov, acknowledged in the morning of March 26 that there still were certain points in the building, where temperatures reach several hundreds degrees Celsius.

As of 8:30 a.m. MSK on March 26, 53 people were killed and 16 were missing as a result of the fire, but the death toll may climb as firefighters work. At least nine of the victims are children. None of the bodies have been identified yet. According to eyewitnesses, people were evacuated from one cinema hall (there are three of them in the shopping center). In another cinema hall, a children's cartoon film was being shown when the blaze started.

Terrifying videos made at the scene show people jumping out of windows and falling to the ground.

Most of the victims were found in cinemas on the 4th, upper floor of the shopping center. Firefighters could access the cinemas only in the evening of March 25. One of the victims is believed to be an 11-year-old relative of Kemerovo region Governor, Aman Tuleyev.

Representatives for operational headquarters reported that the fire in the shopping and entertainment center was eliminated. Rescuers are searching for the bodies. No open fire sites have been left, firefighters work to extinguish smouldering areas.