Islamic State executes Messi and Neymar prior to World Cup 2018 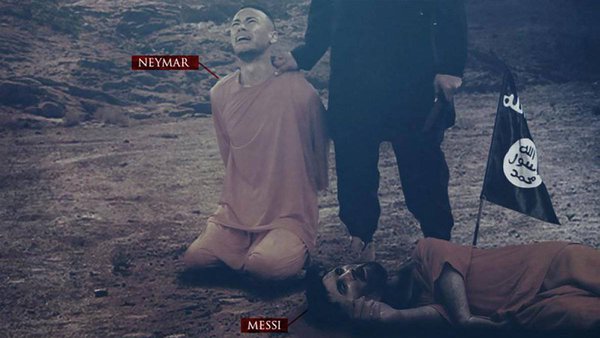 The Islamic State terrorist organization (banned in Russia) published new threats to soccer stars who intend to participate in the World Cup that kicks off in Russia on June 14 2018, Spanish publication AS said.

A gruesome photo from the terrorist group shows a militant executing Barcelona and Paris Saint-Germain players Lionel Messi (Argentina) and Neymar (Brazil) against the backdrop of the black flag of the terrorist movement.

"You will not be safe as long as we live in Muslim countries," the caption to the photo says.

Terrorists have previously tried to intimidate both players and organizers of the 2018 World Cup in Russia. On a previously released photo, Messi was seen crying tears of blood and terrorists attacking World Cup hosting cities.