Train crashes into bus stuck on tracks in Russia, at least 19 killed

A train rammed into a passenger bus, the motor of which died on railway tracks in the Vladimir region of Russia on Friday, October 6. The drivers could not start the engine because of a problem with a battery. Sixteen people, including one child, were killed in the accident, but the bus driver survived. Five people were hospitalized, four of them remain in critical condition. 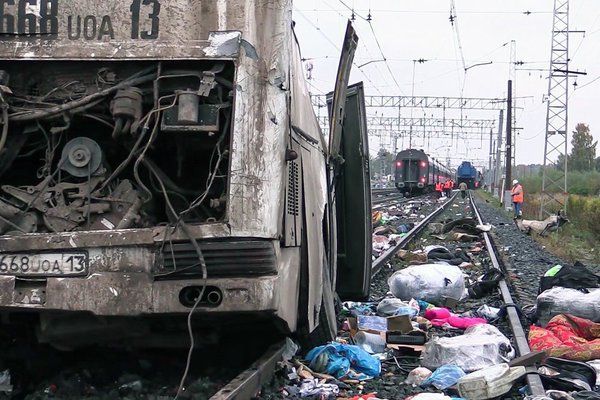 The Mercedes bus was reportedly carrying 55 citizens of Uzbekistan to Moscow. There were two drivers in the bus, nationals of Kazakhstan, one of them was killed.

"The battery was weak, we wanted to start it up, but it wouldn't," Sarman Nurgali, the driver who survived in the accident said. It was the first time, when the bus, made in 1990, broke, he added.

Representatives of the Foreign Ministry of Kazakhstan said that the bus was registered in Southern Kazakhstan and belonged to an individual entrepreneur.

The accident occurred at 03:29 a.m. in the area of the Pokrov station of the Vladimir region, when a train traveling from St. Petersburg to Nizhny Novgorod crashed into the bus on the railway tracks. The train driver tried to stop the train, although to no avail. The break path of the train was said to be over 700 meters. Thirty-four passengers of the bus survived.

A criminal case was filed into the accident under Part 3 of Article 263 of the Criminal Code of the Russian Federation "Violation of safety rules for the movement and operation of rail, air, sea and water transport."

According to most recent reports, the death toll from the accident in the Vladimir region has climbed to 19. German Chancellor Angela Merkel presented her condolences to President Putin in connection with the tragedy.