A video of the US airstrike on Syria has appeared on the Internet. The video, posted by Germany's Bild newspaper, shows a strike on terrorists' warehouses, where chemical weapons were stored. The explosion has led to catastrophic consequences, hundreds of people were killed. 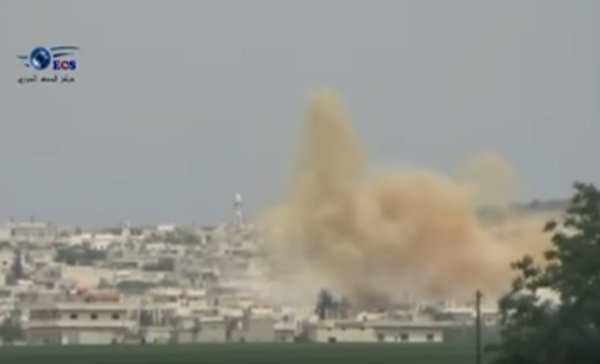 The video shows columns of yellow smoke rising in the sky. It is believed that the bombed warehouses were used to store chemical weapons. According to Syrian experts, large amounts of toxic substances were thrown into the air.

The airstrike of the US-led coalition on headquarters and warehouses of the Islamic State terrorist group (banned in Russia) near the city of Deir ez Zor (420 km from Damascus) led to the poisoning of hundreds of people, including civilians.

The airstrike has proved the fact, which the West prefers to ignore: ISIS terrorists possess chemical weapons.

Predictably, representatives for the US command refuted the air strike of the US-led coalition. A spokesman for the American military coalition that runs operations against the Islamic State in Syria denied the report. The spokesman, Col. John L. Dorrian of the Air Force, tweeted: "Not true! Intentional misinformation...again!"