For the first time in the history of the United States, the Pentagon used its most sophisticated non-nuclear weapon, the super-powerful GBU-43 bomb, which is unofficially referred to as the "mother of all bombs" (MOAB). The USA dropped the bomb on positions of the Islamic State terrorist organisation (banned in Russia) in eastern Afghanistan, CNN reports. 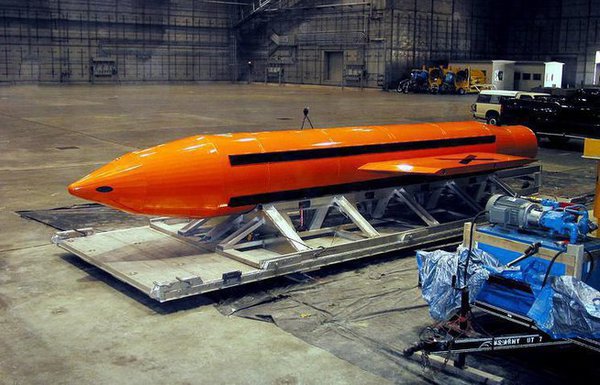 The GBU-43 bomb was dropped from MC-130 aircraft in the Afghan province of Nangarhar, located in the east of the country on the border with Pakistan.

Reportedly, the target of the bombing included tunnels and caves of the Islamic State terrorist organisation. The US military assess the damage caused to terrorists.

The White House confirmed the air strike on the positions of the Islamic State in Afghanistan.

"We targeted a system of tunnels and caves that ISIS fighters used to move around freely, making it easier for them to target US military advisers and Afghan forces in the area," Spicer said at a press briefing. "The United States takes the fight against ISIS very seriously, and in order to defeat the group, we must deny them operational space, which we did."

Spicer also stressed that the US did everything possible to avoid casualties among civilians. However, he refused to go into details about the operation, and redirected those questions to the Pentagon.

GBU-43 (MOAB) is an American high-explosive aerial bomb, one of the largest aerial bombs equipped with a satellite guidance system. The bomb was developed in 2002-2003. GBU-43 weighs  9.5 tons, of which 8.4 tons account for the explosive.

The power of the GBU-43 explosion is equivalent to eleven tons of TNT. The explosion causes damage within the radius of about 140 meters, partial destruction occurs at a distance of up to 1.5 kilometres from the epicentre. Before today's explosion, the US had 15 such bombs in its arsenal.