Russian Ambassador to Turkey, Andrei Karlov, has been killed in a terrorist attack, TASS reports with reference to a source in the Turkish Foreign Ministry. The attacker shot the Russian ambassador dead, killing him on the scene. 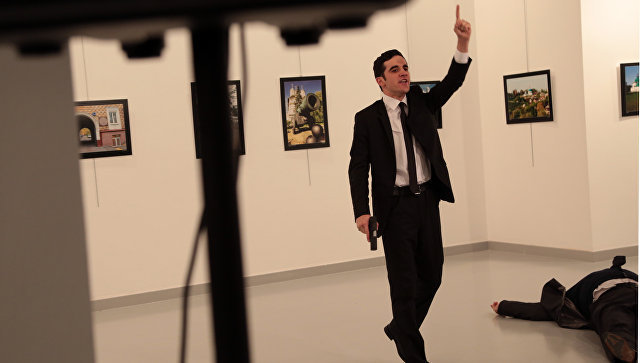 According to eyewitnesses, an armed man burst into the room of the Modern Art Gallery in Ankara, where a photo exhibition was held. The art show was called "Russia through the eyes of traveler, from Kaliningrad to Kamchatka."

The attacker, dressed in a suit and tie, shouted "Allahu Akbar" before the attack. He shot the ambassador when he was finishing his speech.

Karlov was not the only victim of the attack. According to CNN Türk, three other people were wounded.

The shooter was a police officer in Ankara.

According to Turkish media reports, the police encircled the building and neutralised the attacker. The attacker entered the building by presenting a policeman's ID. Reportedly, the shooter was killed afterwards.

The incident is associated with negotiations between Russia Iran and Turkey on Aleppo.

The diplomat was killed at a time when Russia and Turkey have started to normalize relations, and only one day before the head of the Turkish Foreign Minister Mevlut Cavusoglu was due to arrive in Moscow for talks with Russian and Iranian counterparts.

It is possible that the attack could be a provocation arranged by opponents of the negotiations.

Russian President Vladimir Putin is looking into the situation with the attack on the ambassador, reports Interfax.

"The President has been informed. The information is being verified. The president plans to listen to reports from the Minister for Foreign Affairs and heads of intelligence agencies,"  president's press secretary Dmitry Peskov said, RIA Novosti reports.