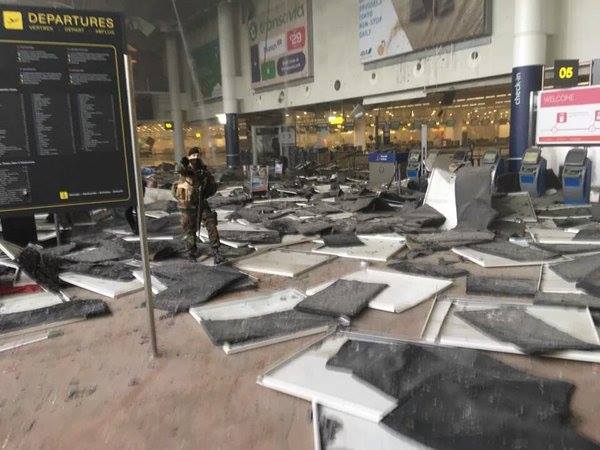 According to Belgian news agencies, more than ten people were killed in the blasts. The exact number of victims remains unknown for the time being. The explosions were accompanied with gunfire and shouting in Arabic.

As many as 35 people were injured in what appears to be another massive terrorist attack on a European capital. Many of the injured received punctured wounds from fragments of broken glass  and tile inside the arrivals hall of the airport.

Moment of the explosion at Brussels airport. Video

The attack in the Brussels airport was conducted by a suicide bomber. The bomb exploded near American Airlines desk.

First victims of the terrorist attack at Brussels airport. Video

Shortly after the terrorist attack at the airport of Brussels, another explosion ripped through the subway of the Belgian capital. Reportedly, there were at least two explosions in the metro. After the blasts, all metro stations in Brussels have been closed and passengers evacuated. For the time being, there is no information about victims of the metro blasts.

The Belgian authorities have raised the terrorist threat in the country to the maximum level.

The explosions occurred four days after the Belgian police arrested Salah Abdeslam - the organizer of the terrorist attacks in Paris on November 13, 2015.