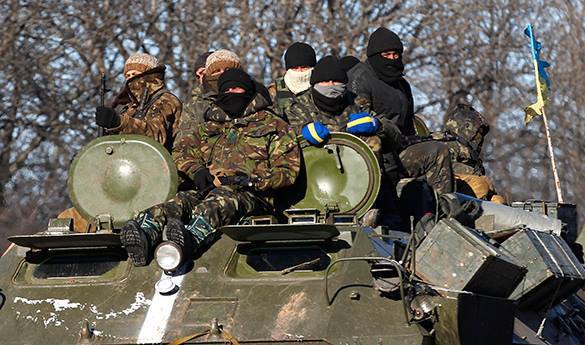 Demoralized Ukrainian soldiers, who filled the town of Artemovsk after the messy retreat from Debaltseve, complain of incompetence of their command, hopeless situation and terrible losses, Pravda.Ru reports with reference to The New York Times.

In Artemovsk, Ukrainian soldiers booze and fire guns on the central square of the town. One can see many military men standing on the streets, holding a gun and a bottle of alcohol.

Some of the soldiers, who retreated from Debaltseve, would ride taxis without paying the driver. Other would circle around a restaurant, ordering cognac, for which were not able to pay, shooting guns in the ceiling.

It was not immediately clear whether all soldiers were given a place to sleep, Pravda.Ru correspondent says.

The newspaper does not give any information about the losses of the Ukrainian troops in Debaltseve, thus proving that this question is a politically motivated issue.  As Pravda.Ru reported, the numbers of the losses in the reports provided by militia forces were a lot higher than those voiced by official Ukrainian sources.