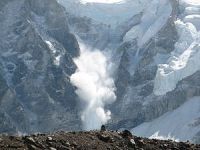 An avalanche in the Austrian Alps has killed two members of the United States skiing team near the Rettenbach Glacier before the 2015 Alpine Skiing World Cup. Ronnie Berlack (20) and Bryce Astle (19) were in a group of six skiing down the mountain.

The other four members of the team survived the avalanche, caused by mild temperatures after days of heavy snowfall. Experts say the skiing activity on the Gaislachkogel mountain near Solden. The mountain is around 10,000 feet or 3 kilometers high.