The police of the Novosibirsk region continue investigating an unusual criminal case. The case was filed against a man, who killed his friend. The man used an unusual weapon - a snack product. 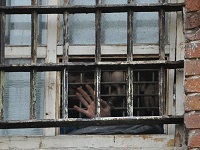 Forty-year-old resident of the Ordyn district killed his acquaintance with the help of a chocolate bar, the official website of the regional prosecutor's office said. He was charged with "Intentional infliction of grievous bodily harm, resulting in the death of the victim." The defendant faces 15 years in prison.

According to investigators, in June of 2014, the suspect, being in a state of alcoholic intoxication, came into conflict with his friend near "Aeroflot" train station. In the course of the fight, the man started beating the victim, knocked him down on the ground and continued kicking the victim on the head and body.

Afterwards, the attacker pulled a chocolate bar out of his pocket and shoved it down the victim's throat, thus blocking his airways. The man died on the spot.

The murderer, who chose such a sophisticated way of violence, stole the victim's  cell phone and money before escaping from the crime scene. Some time later, the perpetrator was arrested in Novosibirsk. Last Thursday, prosecutors approved the indictment.