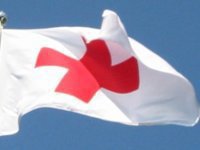 In Donetsk, on October 2, deputy head of mission of the International Red Cross Laurent Etienne DuPasquier of Switzerland was killed in a mortar attack. A shell fired from positions of Ukrainian military hit the Red Cross office on Universitetskaya St, 80A. The office building of the Red Cross was damaged. The body of the killed citizen of Switzerland was delivered to morgue.

The first vice-premier of the People's Republic of Donetsk Andrei Purgin confirmed the shelling of the center of Donetsk by the Ukrainian military. According to Purgin, law-enforcement agencies of the republic will investigate the incident.

The OSCE expressed concerns in connection with the death of a Red Cross employee in Donetsk. "OSCE representatives still study it, collect facts, and tomorrow there will be a report delivered on the subject. Of course, we are concerned, and we present our condolences. We do our best to find out what happened," press-secretary of the Special Monitoring Mission of the OSCE in Ukraine Michael Bociurkiw told RIA Novosti.