Fire engulfed the whole 25-storeyed apartment building in the city of Krasnoyarsk on September 22nd. The blaze damaged the area of about 2,000 square meters. The fire spread to the entire height of the building on its southern and eastern sides. 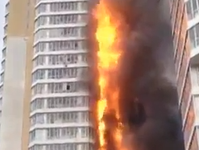 As a result of the fire, 14 apartments in the building burnt out completely. No one was hurt or killed - all tenants were evacuated promptly.

Helicopters were putting down the fire on the upper floors of the building. As many as 36 pieces of hardware and more than a hundred firefighters took part in the operation to extinguish the fire of the highest, 4th degree of complexity.

The cause of the fire in the 25-storeyed apartment building in Krasnoyarsk was a violation of safety rules during welding works.

A 34-year-old resident of the building was working with welding equipment on the balcony, when the outer coating of the ventilated facade caught fire. The fire quickly spread to the area of ​​nearly 2,000 square meters.

A criminal case was filed under article "Destruction or damage to property through negligence."