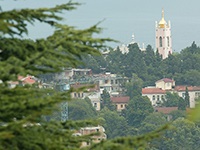 The Committee on National Security and Defence of the Verkhovna Rada of Ukraine adopted a resolution stating the inadmissibility of the termination of water supplies to the Crimea.

The Committee is preparing an appeal to the Cabinet of Ministers of Ukraine, which requests the government should quickly develop a series of activities at the international level to manage and resolve the issues related to water for the Crimea.

Noteworthy, Russia has already taken efforts to partially solve the problem of fresh water supplies for the Crimea. In addition, the Defense Ministry of the Russian Federation delivers fresh drinking water to the Crimea from artesian wells.