Militants take half of Iraq under control 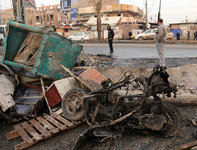 Militants of the radical group "The Islamic State of Iraq and the Levant" seized the Iraqi city of Tikrit, which is home to more than 30 thousand people.

The government of Iraq demanded the Parliament should introduce a state of emergency throughout the country. Nevertheless, if one looks at the number of towns and cities that terrorists have taken under their control, it becomes clear that there is a full-fledged civil war going on in the country.

"The Islamic State of Iraq and the Levant" is a half-real quasi state with Sharia form of government, which partially controls the territory of the so-called "Sunni Triangle"  - the conditional territory in Iraq to the north and to the west of Baghdad). The prime enemy of the organization is the Shiites. From mid-2003 till the end of 2004, the "Sunni Triangle" was the main stronghold of resistance forces to U.S. troops. Among the Sunni population, there are many supporters of the deposed regime of Saddam Hussein, while the Shiites generally treat the U.S. troops as liberators.