The death toll from the explosion and fire in a coal mine in Turkey has climbed to 282. As many as 100 miners may still be trapped deep under the ground. The country has declared three days of mourning. 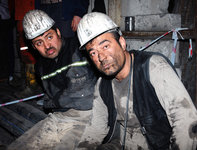 The disaster occurred in the coal mine near the town of Soma in Manisa province, some 250 km south of Istanbul. According to preliminary data, the accident occurred as a result of short circuit in a switchboard, which triggered an explosion of methane. A fire then broke out in the mine at the depth of two kilometers. The supply of electricity was discontinued, elevators were stopped, and people found themselves trapped. At the time of the explosion, there were 787 miners underground; as many as 300 of them managed to escape to safety on the surface.

"Over the past 12 hours no living person has been found in the mine. To date, forensic experts have completed the inspection of 217 bodies. The bodies have been delivered to their families for burial," Turkish Minister for Energy and Natural Resources, Taner Yildiz said.

Meanwhile, the Trade Union Confederation of Turkey called for a mass protest action. "Those who continue to pursue the policy of privatization, who cuts costs, endangering the lives of workers, are guilty of the mass murder in Soma and should be held accountable for that," spokespeople for the organization said in a statement.

Numerous actions of protest have gripped Turkey after the tragedy in Soma. Thousands of protesters took to the streets of Ankara and Istanbul, accusing the authorities and representatives of the mining industry of criminal negligence and demanding the resignation of the government.