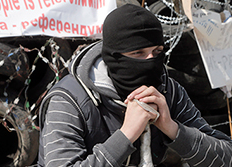 Activists of the People's Republic of Donetsk established the Central Election Commission to hold a referendum on the status of the region.

"We are now intensively working on preparations for the referendum. We created the Central Electoral Commission yesterday and decided on its personnel," said the commissioner of social and patriotic movement "Eastern Front" Nikolai Solntsev, who also became a member of the commission.

Currently, the members of the commission make the lists of those who have the right to vote. "We are now working with local authorities, collect electronic lists and  prepare observers. All this work is being conducted fruitfully," said Solntsev.