The individuals, located in the building of the regional department of the Security Bureau of Ukraine (SBU) in Lugansk, seized the room where weapons were stored, the press service of the Main Directorate of the Interior Ministry in the Luhansk region said. 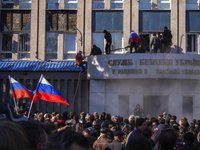 "The building is currently blocked by protesters, who took the premises. According to latest information, they seized the room where the weapons were stored," the statement said.

Last night, unknown individuals blocked traffic on the main road of the city​. The Lugansk police were put in a state of combat readiness. "Traffic police blocked all entrances to the city of Lugansk," officials said.

In Lugansk, the protesters occupied the building of the regional department of the SBU. They demand the release of previously arrested activists, including their leader, "people's governor" Alexander Kharitonov.

The building of the Security Service of Ukraine was seized in the city of Donets too. Activists of "The People's Militia of Donbass" said that they were fortifying the building on the perimeter and auditing the archival document base and logistics complex.

Earlier, pro-Russian activists stormed the regional public administration and hoisted a Russian flag over the building.