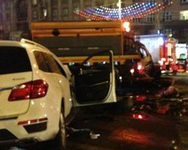 A large car accident took place on Kutuzovsky Avenue in Moscow that claimed the life of Vice Prime Minister of Dagestan Haji Makhachev. Two other people were also killed in the accident; five were injured. There are three children among the victims.

The accident occurred on Thursday night, when Makhachev's Mercedes GL, for unknown reasons, rammed into concrete dividing blocks and found itself on the wrong lane.

The Mercedes then crashed into Chevrolet Express minivan that caught fire after the collision. Two more cars were also damaged in the accident.

A criminal case was filed into the fact of the accident under "Violation of traffic rules, resulting in the death of two or more people."

Russia takes one of the leading positions on the number of road accidents in the world.