KAZAN / RUSSIA - A Boeing 737 crashed while attempting landing in the Russian city of Kazan, capital of the Republic of Tatarstan, killing all 50 people on board, according to the Emergencies Ministry of Russia .

Tragedy in Russia: - Airplane explodes on landing and kills all 50 people on board

The flight, which followed from Moscow to Kazan, made ​​two attempts at landing, but on the second, exploded on impact, killing all 44 passengers and six crew aboard. The flight was operated by regional airline Tatarstan. There are reports that the airplane landed on the runway, others near the runway.

Russian President Vladimir Putin lamented the accident and instructed the government to form an urgent commission investigating the causes of the accident. The main draft of the disaster is an error of the crew or else technical failure.

Profile of Flight: The Boeing - 737 aircraft is a American manufactured, commercial jet, twin-engine , narrow-body ( narrow body ) and produced by Boeing single aisle. It is the best-selling aircraft in the history of civil aviation worldwide. 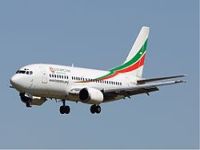 This is the seventh loss of a Boeing 737-500, the third worst incidentamong the 390 aircraft built.