Two explosions rip through the center of Makhachkala, Dagestan 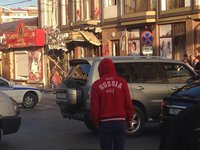 Two explosions occurred in the center of the Dagestani capital, Makhachkala, on Wednesday afternoon, October 30. According to local residents, the explosion occurred at the corner of Sovetskaya and Dakhadaev streets in "Ladies' Man" jewelry shop. Another explosion occurred soon afterwards near the entrance to the store with alcoholic beverages.

According to preliminary information, there were no casualties; about ten people were injured.

The intersection of the above-mentioned streets is located in the very center of Makhachkala. It is one of the busiest areas of the city. The area of the explosion was left without electricity. Gas supplies were interrupted as well to avoid distribution of fire.