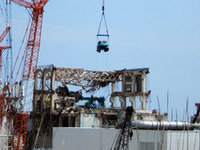 The radiation level at Japanese nuclear power plant Fukushima-1 reached the highest point after the accident in March 2011. The reason for such a significant rise in radiation was the error made by engineers involved in the liquidation of the aftermath of the tragedy.

The engineers erroneously disconnected the pipe, on which radioactive water was flowing from the reactor. As a result, almost 10 tons of liquid with a high content of cesium and strontium-90 found itself in the ocean. Six people suffered from serious radiation exposure.