President Obama canceled the provision of the federal law designed specifically to prevent arms supplies to terrorist groups. The move was made to give the U.S. an official way for military aid to the Syrian rebels, most of whom are radical Islamists, The Washington Examiner said. 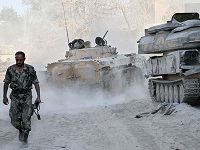 The president made the announcement on September 16, stating that he was lifting restrictions in sections 40 and 40A of the law on the control of arms exports related to transactions of the kind.

In these sections, it goes about the ban on arms supplies to the countries indicated in paragraph 40(d) - the ones that the State Department may find suspicious in supporting acts of international terrorism.

U.S. law allows the president to cancel the above-mentioned restrictions, if "the matter is necessary in the interests of U.S. national security."

Republican Sen. Bob Corker of Tennessee said that the US intelligence had accurate information on whom to support. He acknowledged that one could make mistakes, and a part of the weapons would be given to those who should not receive any weapons at all. But in any case, the United States should do everything to support the opposition free Syria, he added.