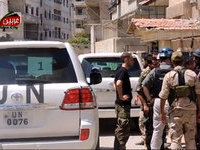 The U.S. Department of State recalls embassy staff and their families from Beirut over the threat to their lives. In addition, the U.S. government urged its citizens not to travel to Lebanon. Those, who are already staying in the country, were asked to immediately leave its territory.

Lebanese security forces have stepped up security at a distance of about 700 meters around the U.S. embassy after it became known that the supporters of Syrian President Bashar al-Assad were going to hold a sit-in strike to protest against aggressive actions of the U.S. against Syria.