Obama should be deprived of Nobel Peace Prize, if USA strikes Syria 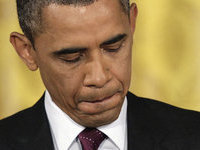 American President Barack Obama received a Nobel Peace Prize in 2009 for his "extraordinary efforts to strengthen international diplomacy and cooperation between people."

The head of the State Duma Committee on International Affairs Alexei Pushkov suggested U.S. President Barack Obama should be deprived of the Nobel Peace Prize in the event the Americans strike a military blow on Syria, he wrote on Twitter on Friday, August 30.

"If the United States strike Syria without a sanction from the UN, the world community must demand the Nobel committee should deprive Obama of the Peace Prize," he wrote.

It is worthy of note that U.S. leader Barack Obama won the Nobel Peace Prize in 2009 for "extraordinary efforts to strengthen international diplomacy and cooperation between people."

Previously, the draft resolution providing for the use of force against Syria had not been approved at the UN Security Council: Russia and China did not support the document.

In addition, the British Parliament opposed the country's participation in the military operation against Syria. The draft resolution from the government received the support from 272 deputies, 285 voted against it.