Helicopter crashes on two Britons and one Russian

In the Murmansk region of Russia, a helicopter crashed, killing a British citizen. Reports about the crash there mixed at first. Russia's EMERCOM has started investigating the "information about the emergency beacon of a Eurocopter. Sources from Interfax and ITAR-TASS said that the helicopter crashed, having killed three people. According to most recent information, the falling helicopter landed on people on the ground. 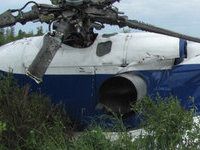 The Interior Ministry provided more details of the incident: Two British tourists disembarked from the helicopter, and the aircraft tried to take off, but was carried away with a gust of wind. The chopper crashed on the people, who were its passengers a few moments ago. The people were killed. The press service of the North-West Transport Prosecutor's Office said that the three people on the ground - two Britons and a Russian - were killed, as they were cut with propeller blades of the helicopter crashing on its side.

The British nationals, Diamond Rupert and Mark Robinson, arrived in the Murmansk region of Russia for a fishing expedition, Interfax said. The killed Russian was a tourist guide, Alexander Tushnikov.

Originally, it was reported that there were two British citizens and one Russian on board the helicopter. Afterwards, it was said that "the helicopter took off from Rynda, flew for one kilometer and performed a hard landing. The victims were most likely on the ground, the helicopter crushed them, Interfax said. According to ITAR-TASS, the helicopter gave a lurch immediately after take off.

The Interior Ministry confirmed the death of two British citizens. It was said that the there were holiday camps in the region that enjoyed popularity among foreigners.