The alleged perpetrator of the terrible car accident in Moscow, in which 18 people were killed on July 13, did not testify. The 46-year-old driver of the KamAZ truck, a native from Armenia, who was hospitalized in serious condition at the Botkin Hospital, woke from an artificial coma. 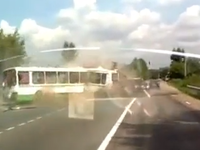 The driver was unable to testify, "possibly because of the poor state of health," the press service of the Ministry of Internal Affairs in Moscow told Interfax. However, this does not prevent investigation from asking the court to arrest the suspect.

The detainee was reportedly identified as Hrachya Harutyunyan, Life News said. According to the newspaper, when questioned for the first time at hospital, he could not even pronounce his own name.

Doctors say that the man's condition is not critical. According to the head of the Emergency Medicine Department of Moscow, Sergei Gumenev, the driver has a "neurotic reaction to a stressful situation, scrapes and bruises." When asked whether the patient's condition allows him to communicate with investigators, Gumenev replied: "It surely does."

The KamAZ truck loaded with gravel, driven by Hrachya Harutyunyan, rammed into passenger bus 1033 on July 13 at about 13:00 near the town of Podolsk. The truck was pulling out from a side road; the impact was so strong that the bus was ripped into two. As a result of the accident, 18 people were killed and more than 30 people were hospitalized.

According to investigators, the KamAZ driver did not give way to the bus.

A day of mourning was declared in Moscow on July 15.

The procedure of identification of the victims was conducted on Sunday. All 18 victims of the tragedy were identified. Most of the victims are residents of the Moscow region. There is a Ukrainian citizen among the victims, officials said.

The relatives of the victims were officially recognized as victims in a criminal case and were entitled to compensation.